In the wastewater sector struvite is usually used as a name for magnesium ammonium phosphate (MgNH4PO4*6H2O), even though it is the name of a mineral family. Struvite is a slow release fertilizer (Kratz et al. 2019) and all three nutrients are plant available as from mineral fertilizers (Watson et al. 2019).

To enable struvite precipitation, a pH of 7.5 and higher is required. Hence, as a first step towards a higher pH, the CO2 is stripped via air injection. In a second step, caustics are added such as NaOH, if the CO2 stripping has not reached the required pH value. To induce struvite precipitation, together with a certain ammonium concentration, a magnesium source is usually added such as MgCl2, MgO or Mg(OH)2. Magnesium forms together with phosphate and ammonium struvite. This takes place in a reaction tank, the so called struvite reactor, which is typically a continuously stirred tank reactor. Crystal growth is promoted by mixing, sufficient retention time and recirculation of formed crystals. As a last step, the struvite in form of larger crystals is separated in a settling tank. Usually, the struvite is dewatered, dried and processed, before it can be applied as a slow-release fertilizer.

Variants of the process: sludge - liquor

If the CO2 stripping and struvite precipitation take place in the sludge, the separation of the struvite crystals is less efficient and the crystals are usually inhomogeneous due to organic and/or inorganic impurities. However, the controlled struvite precipitation can be a useful measure to prevent pumps or pipes in the sludge line from scaling or even clogging (Desmidt et al. 2015).

If the CO2 stripping and struvite precipitation take place in the liquor (e.g. after dewatering), the subsequent separation of the struvite is very efficient. However, the higher phosphate concentrations are, the lower the dewatering efficiency of the upstream dewatering unit is (Kuhn et al. 2013). Thus, the dewatering step might require more energy and sometimes even additives such as polymers in order to reach the required liquor quality. In the liquor, the crystals grow usually homogeneous. In NextGen the focus is on struvite production in the liquor, hence, the following sections will focus on this technological solution only. 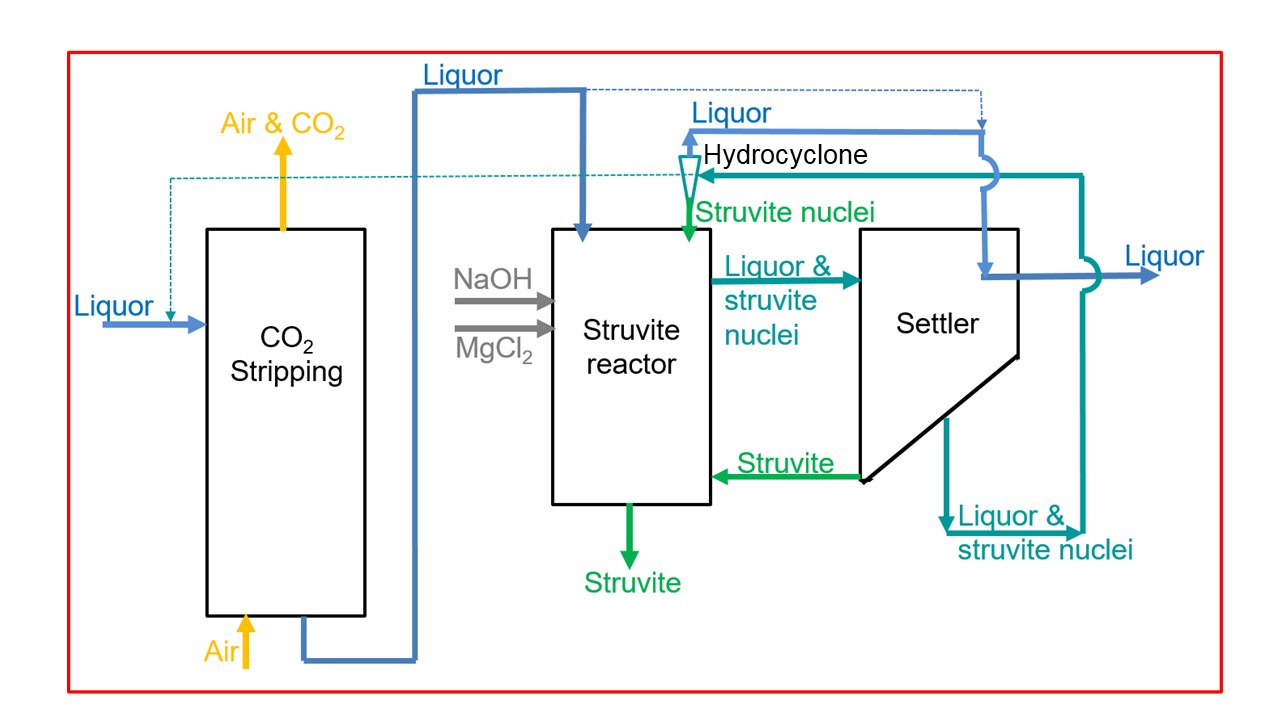 The WWTP profits from the reduced phosphate return load. Thus, a part of iron or aluminium salts often used for a conventional chemical removal might be saved due to the lower return load.

Depending on the chemical composition of the wastewater and the pH conditions, struvite can precipitate in undesired parts in the wastewater treatment plant e.g. in pipes leading to scaling and clogging. Due to a controlled removal of the phosphate from the liquor, those processes will be diminished or even avoided in the subsequent plant parts.

In order to reach high struvite yields, the dissolved phosphate concentration in relation to the total phosphorus content should be as high as possible in the reactor influent. At least the concentration should be at 50 mg PO4-P/L, while the total suspended solids (TSS) and total solids (TS) should be below 600 mg/L and 2%, respectively. Furthermore, ammonium and magnesium need to be present. Therefore, a molar ratio of Mg:N:P between 1:2:1 and 1:12:1 should be maintained in the reactor.

Besides the P-recovery rates, also the solubility of struvite in neutral ammonium citrate (NAC) is shown as a key performance indicator. This solubility PNAC gives a hint to the plant availability and agronomic effectiveness of the fertilizer.