At wastewater treatment plants (WWTPs) with a capacity of 50 000 population equivalents and greater, anaerobic digestion is often used as sludge treatment. Therefore, excess sludge together with primary sludge and sometimes also with co-substrates such as fat, oil, grease, etc. is anaerobically digested and energy is recovered as biogas. Usually, the biogas is burned in a combined heat and power plant on-site in order to produce electricity and heat.

Anaerobic digestion is carried out by microorganisms and comprises four phases: hydrolysis, acidogenesis, acetogenesis and methanogenesis. Within these phases, organic compounds are degraded mainly to methane (60-70%) and CO2 (30-40%). The processes take place under anaerobic conditions. Thus, neither molecular oxygen nor chemically-bound oxygen (e.g. nitrate) are available.

According to Remy and Diercks (2016), best practices for sludge digestion are among others:

Temperature phased digestion usually comprises multiple digesters with different temperatures in order to separate the hydrolysis/acidogenesis at higher temperatures from the acetogenesis/methanogenesis at lower temperatures. Thus, for the whole system, higher organic loading rates and lower hydraulic retention time can be achieved. 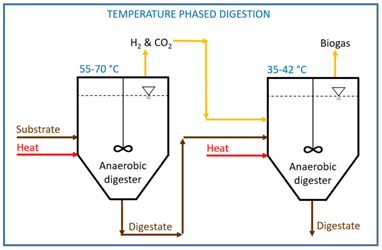 The anaerobic degradation of organic matter resulting in biogas production leads to the reduction of the volatile solid content. Thus, there is less sludge to dewater and hence, less disposal costs occur, correspondingly.

Due to the anaerobic degradation process of organic compounds, also phosphate and ammonium from those compounds are released. Furthermore, if excess sludge from a wastewater treatment plant applying enhanced biological phosphorus removal is used as substrate and enough volatile fatty acids are available, polyphosphate accumulating organisms will release their stored polyphosphate as phosphate. Thus, the effluent from anaerobic digestion can be very suitable for subsequent nutrient recovery such as ammonium sulphate production (air stripping or membrane stripping) or struvite production.

For anaerobic single stage digestion, a continuously stirred tank reactor is required. The hydraulic retention time depends on the substrate and on the maximum generation time of the microorganisms involved in the biogas production process and usually ranges between 10 to 25 days. The reactor temperature is usually around 37 °C or 55 °C for mesophilic or thermophilic organisms, respectively. The pH must be neutral or slightly above, because the methanogens are very sensitive to an acidic pH and are easily inhibited.

Besides the right pH, there are more parameters, which might affect and inhibit the microbial community. Especially for co-digesting new substrates, which are unknown to the operator for his/her system so far, the different substances which might be contained in the substrate should be considered.

In the digester, a certain concentration of such a substance can lead to a process failure such as an over-acidification and a strong decrease in the biogas production rate. If inhibiting substances occur simultaneously, the effects can be synergistic or antagonistic. Thus, in the Tab. 2 according to ATV-FA 7.5 (1990), ranges concerning those substances are presented.

Tab. 2    Concentration ranges for substances that can inhibit methanogens in a digester

For co-substrates, typical ranges for their methane yields are shown in the following figure according to Deublein et al. 2008 and Rosenwinkel et al. 2015 as a hint for the additional potential for biogas production due to co-digestion. 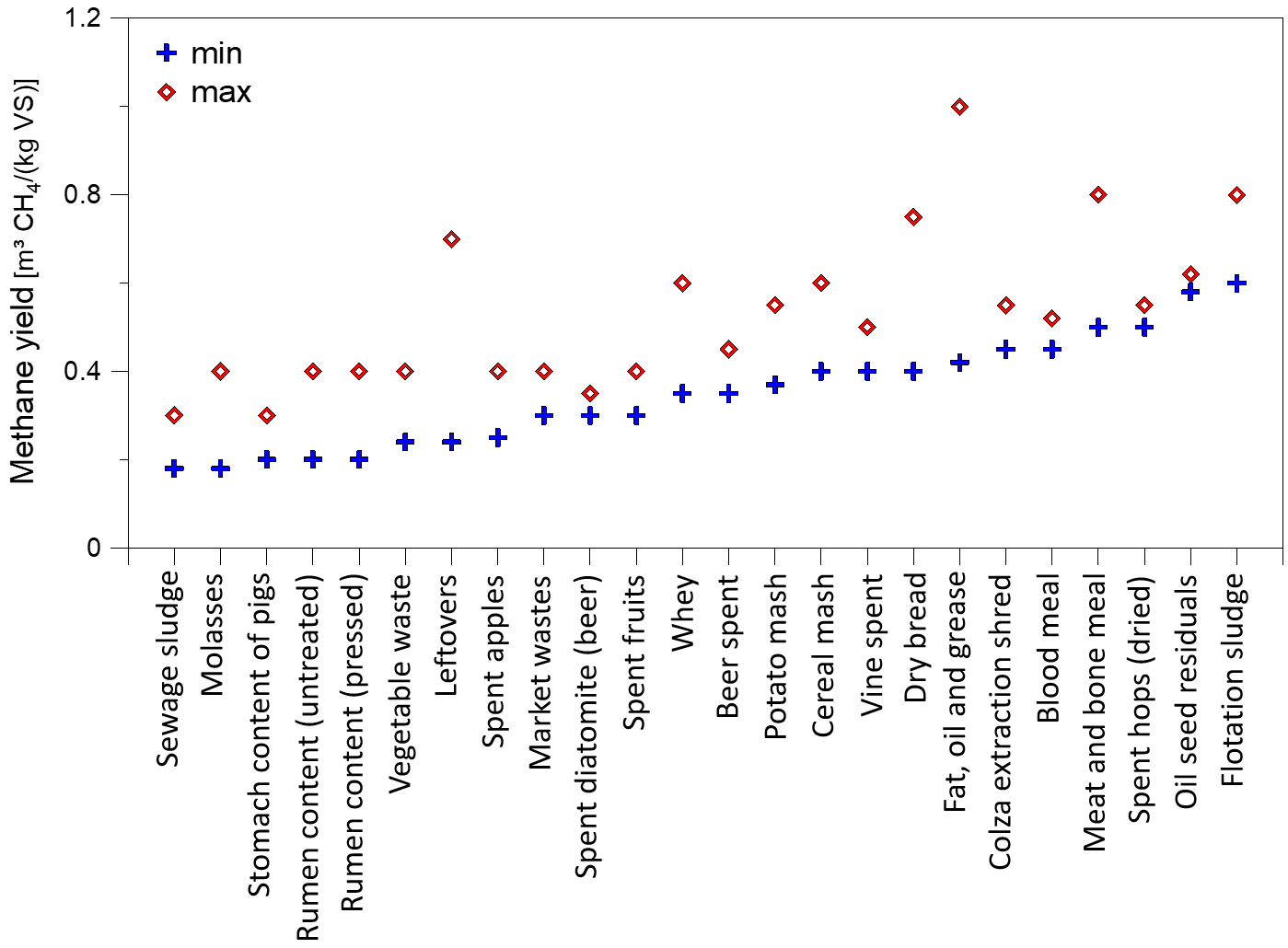